“Sakht Launda” is one of comedian, Zakir Khan’s famous punchline. It became popular meme template and gained popularity among single guys because of its qualities such as, not giving your jacket when your girlfriend is cold.

So nowadays apparently all boys pretend to be ‘sakht launday’ because it’s ‘cool’. Sakht launday are the ones ‘jo asaani se nhi pighalte’ or the ones who can talk to girls without flirting. Right?

But how can you tell if it’s a real sakht launda or a pindi boy in disguise of a sakht launda, to specially woo girls who fall for the said breed of launday. Being a Sakht Launda has a lot more to it than we fathom. 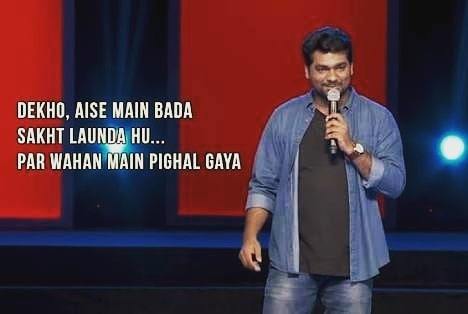 What exactly does it mean to be a sakht launda?

First of all a real sakht launda doesn’t apparently advertize the fact that he is one on Facebook or in general, it’s a red flag if he emphasizes on it too much.

Sakht Launday are comfortable talking about literally anything with girls without judgement, because they think of girls as human beings and not as an opposite gender that they have to woo 24/7.

Sakht Launday are loyal. As they don’t melt easily, the ones they melt for, is with all their heart. So if a guy is pretending to be a sakht launda and then changing girlfriends every two seconds, if they don’t get along with one, take a U-turn and run.

Sakht Launday are not easily manipulated. Neither by girls or peers to do things they don’t want to.

They have high standards, they won’t just get involved with you because you are a girl. With wisdom and understanding come rocket high standards as we are talking about a species that has surpassed its primal urges.

So folks think again if you want to enter into this territory of being a sakht launda, cuz it ain’t no joke. It comes with serious work,  understanding and possibly previous heart breaks. Don’t just be it to get girls, which is exactly the opposite of being one. And if the picture below still distracted you from finishing this paragraph then you my friend have a long way to go.

Some Major Entertainment Events That Have Been Affected By COVID-19

Three reasons why you should switch to Veganism?

Top Auction Houses of The World

Why Central Banks Should Be Independent?